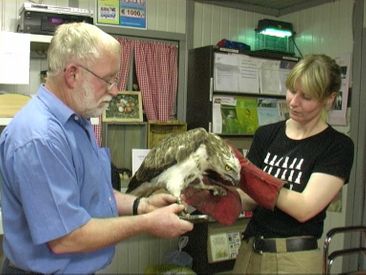 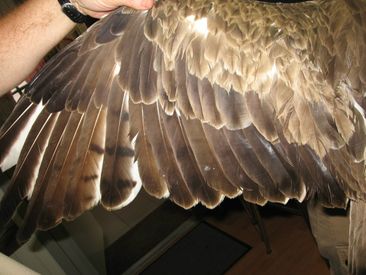 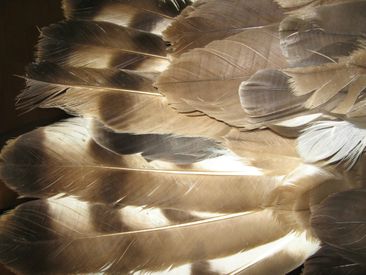 Mortel T. van de 2006. Male Short-toed Eagle Circaetus gallicus, presumably immature, found emaciated in The Netherlands in May 2006.De Takkeling 14: . On 27 may 2006, a weakened Short-toed Eagle, unable to fly, was brought to a rehabilitation centre in the southern Netherlands. After a spell of warm weather, with maximum temperatures rising up to 25 C, in the first half of May 2006, a series of depressions passed The Nederlands in the second half of May, resulting in a steep drop in temperature (maximum 12-12 C), heavy rainfall and hail- and thunderstorms. It is thought that this bird had faced serious problems in obtaining food on the local heaths during the adverse weather conditions in late May. After rehabilitation, the bird was ringend and successfully released on the Strabrechtse Heide on 17 June 2006. The bird had white underparts, a few brownish streaks on the side of the breast, a white head with brown streaks (increasing in intensity towards the neck), greyish upperparts and a yellow iris. Its sex was identified by means of DNA obtained from feather samples (using specific PCR reaction for the CHD gene on the sex chromosomes); a male, presumably immature (given plumage characteristics). Wing length was 530 mm, tail length 310 mm and tarsus + heel 104 mm. The bird was in active moult in primaries and rectrices. Literatuur Campora M. 2002. Sexual dimorphism and juveniel plumage in the Short-toed Eagle Circaetus gallicus (Gmelin, 1788). Riv, ital. Orn. 72: 35-45.Campora M. & Cattaneo G. 2005. Ageing and sexing Short-toed Eagles. British Birds 98: 370-376.Mortel T. van de 2006, The Nederlands, De Takkeling.